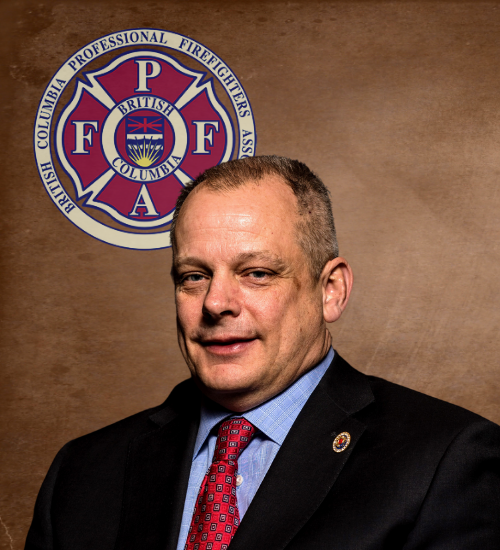 Gord was hired in 1997 by the Vancouver Fire and Rescue Services and is a Captain in fire suppression. He previously served as president of Vancouver Local 18, BCPFFA vice president, executive vice president, and Secretary-Treasurer.

Gord.was acclaimed as the president of the B.C. Professional Fire Fighters Association at the 2016 BCPFFA Convention and is now in his second term after being acclaimed at the 2018 and 2021 Conventions. Gord sits on two BC Boards; BCPFFA Executive Vice Presidents Board and BCPFF Burn Fund Board of Directors. Gord is part of several provincial committees such as Municipal Pension Plan (MPP) partner group and BC First Responders Mental Health in partnership with WorkSafe BC.

In Gord’s time off (which is rare) he can be found enjoying time with his precious family, entertaining guests and the occasional game of hockey or round of golf.